You are here: Home » Tours and Activities » Aboriginal Art

The Kimberley region of northern Western Australia is a vast region covering more than 400 000 square kilometres. It is home to Aboriginal people of diverse language and cultures.

Kimberley art is recognised as a strong and distinctive style.

Wandjina figures are some of the most visually striking of all images in Kimberley art.

The Worrorra, Wunambal, and Ngarinyin people of the north-western and central Kimberley say that the Wandjina are the creator beings of the Dreaming, and that they made their world and all that it contains. They are found in many rock art sites in caves and rock shelters throughout the Kimberley.

Wandjina are usually painted as full-length, or head and shoulder, figures, either standing or lying horizontally. Their large mouthless faces feature enormous black eyes flanking a beak-like nose. The head is usually surrounded by a band with outward radiating lines. Elaborate head-dresses are both the hair of the Wandjinas and clouds. Long lines coming out from the hair are the feathers which Wandjinas wore and the lightning which they control. Wandjina ceremonies to ensure the timely beginning of the monsoon wet season and sufficient rainfall are held during December and January, following which the rains usually begin (Source: Western Australian Museum).

Aboriginal people believe that if the Wandjina are offended then they will take their revenge by calling up lightning to strike the offender dead, or the rain to flood the land and drown the people, or the cyclone with its winds to devastate the country. These are the powers which the Wandjinas can use.

Mowanjum Art and Culture Centre features authentic Aboriginal Art from Mowanjum Community and out-stations.  Wandjina and Gyorn-Gyorn images predominate, inspired by the sacred rock art sites of the North Kimberley.  Open 7 days, 9am to 5pm from May  to September. Mon-Fri from  October to April. Closed from December 18th through to February 2nd. 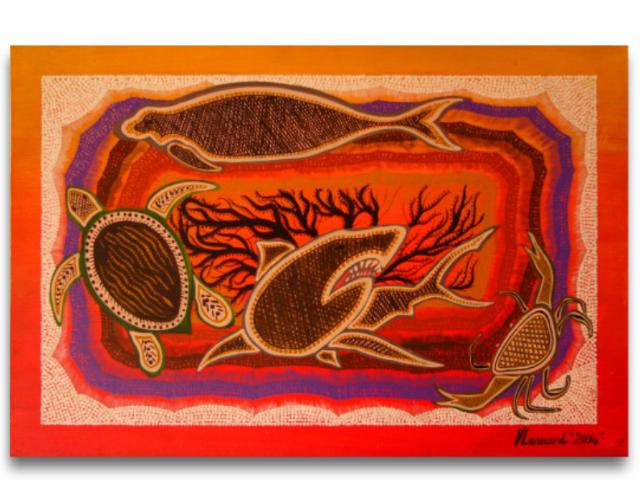