You are here: Home » About the Area » Derby

The town of Derby is located on the tidal mud flats on the edge of the King Sound. It has the highest tidal range of any port in Australia.

The boab tree is a major feature of Derby. It has been used as a street tree and many of the larger growing natural specimens have been preserved. The famous Boab Prison Tree is located 7 kilometres from the town.

Population
The town has a population of some 4,500 people. Half of the population are Aboriginal Australians, with three different Aboriginal languages.
A high proportion of the population are employed in State and Commonwealth Departments or Instrumentalities such as Main Roads WA, Health Services and the Water Authority, and in providing services to outlying Aboriginal Communities. The remainder are small business people employed in servicing the mining, pastoral and tourism industries.

Amenities
As a service town Derby offers all the amenities. It has recreation facilities including a swimming pool, library, art gallery, ovals and courts for football, cricket, tennis, squash, netball, basketball, rodeo and horse riding. A good selection of shopping is available with two chain stores, clothing and furniture shops, newsagency, chemist and hotels and restaurants/cafes. There are two primary schools, a high school, Telecentre and pre school facilities. Health services are provided by the hospital and there are extended care facilities for the aged and infirm.

Derby Bus Service offers a Derby to Broome Service three times a week. At present no airlines fly direct to Derby, flight are available into Broome with both Virgin Australia and Qantas.

Derby is the closest town and therefore the ideal stepping stone to the awesome gorges of the Gibb River Road and the spectacular display of the Horizontal Waterfalls and Buccaneer Archipelago.

Origins
The town had its origins in the pastoral and mining industries. It developed as a Port to service the pastoral properties along the Fitzroy River after the exploration of the area by Alexander Forrest in 1879. Pearl luggers collecting in the Buccaneer Archipelago also used the Port after it was established in 1883. Then the town boasted a police detachment and Government residence. By 1884 a hotel, jetty and tramway were being constructed - all firsts for the Kimberley. The 1886 gold rush at Hall’s Creek led to a boom in development.

The pastoral and mining industries and administration and tourism continued to be the main impetus in the town. Minerals found in the hinterland include oil at Blina, diamonds in the Phillips Range, facing stone from the King Leopold Ranges and lead and zinc from Cadjebut. In 1997 the Derby wharf, which was closed in the 1980s, was re-opened for barging operations for the export of the lead / zinc concentrates. A tidal power plant is being considered for using the tidal flush of Doctor’s creek near the town.

The Derby Leprosarium on the outskirts of the town was one of two in Western Australia that helped to contain an epidemic of the disease from the 1930s to the 1960s. Although Hansen’s disease still occurs throughout the Kimberley, It is now controlled by drugs.

Derby is the main base for the Royal Flying Doctor Service in the Kimberley. The base was established in Derby in 1955.

Communications have always been important for such an isolated town. Derby was famous in the 1920s as the terminus of the first scheduled aviation service in Australia. West Australian Airways Ltd. run by Norman Brearley, began this service with a first flight on December 5th, 1921.At one time the Perth to Derby service was the world’s longest passenger airline route. Wharfinger’s House museum tells the story of the aviation history of the town as well as the history of the Port. 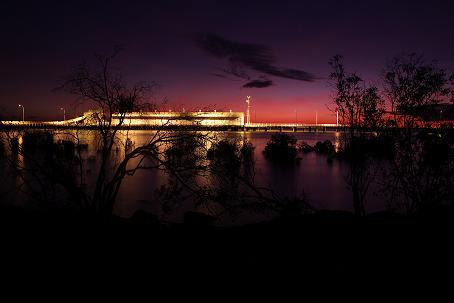