You are here: Home » About the Area » Buccaneer Archipelago » Horizontal Waterfalls

Located deep within Talbot Bay in the Buccaneer Archipelago are the Horizontal Waterfalls. Massive tidal movements create a waterfall effect as water banks up against one side of the narrow cliff passage, to be repeated again on the turning tide.

The twin gaps are part of the McLarty Ranges, which have two ridges running parallel approximately 300 metres apart. The first and most seaward gap is about 20 metres wide and the second, most spectacular, gap is about 10 metres wide.

On a slack tide it is possible to drive boats through the two gaps to the bay behind. The tides in this area have a 10 metre variation which occurs over six and a half hours from low tide to high tide and vice versa. The effect of the waterfalls is created by the tide building up in front of the gaps faster than it can flow through them and there can be a four metre high waterfall between the bays.

The waterfall phenomena has been described by David Attenborough as "one of the greatest natural wonders of the world".

The sight of the turquoise blue water rushing between the rugged red hills is best viewed from the air on a Scenic Flight. 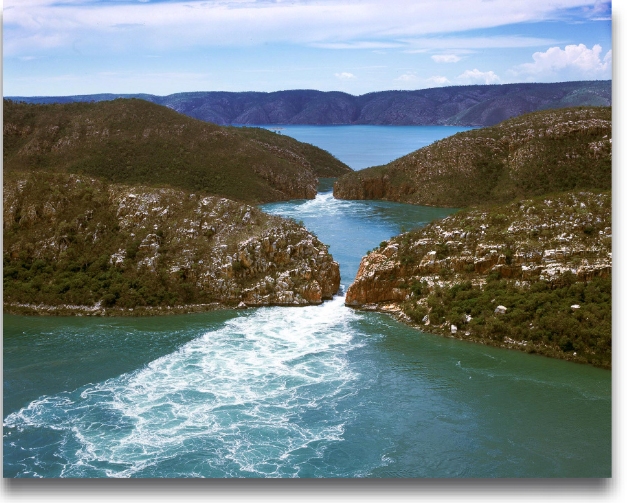